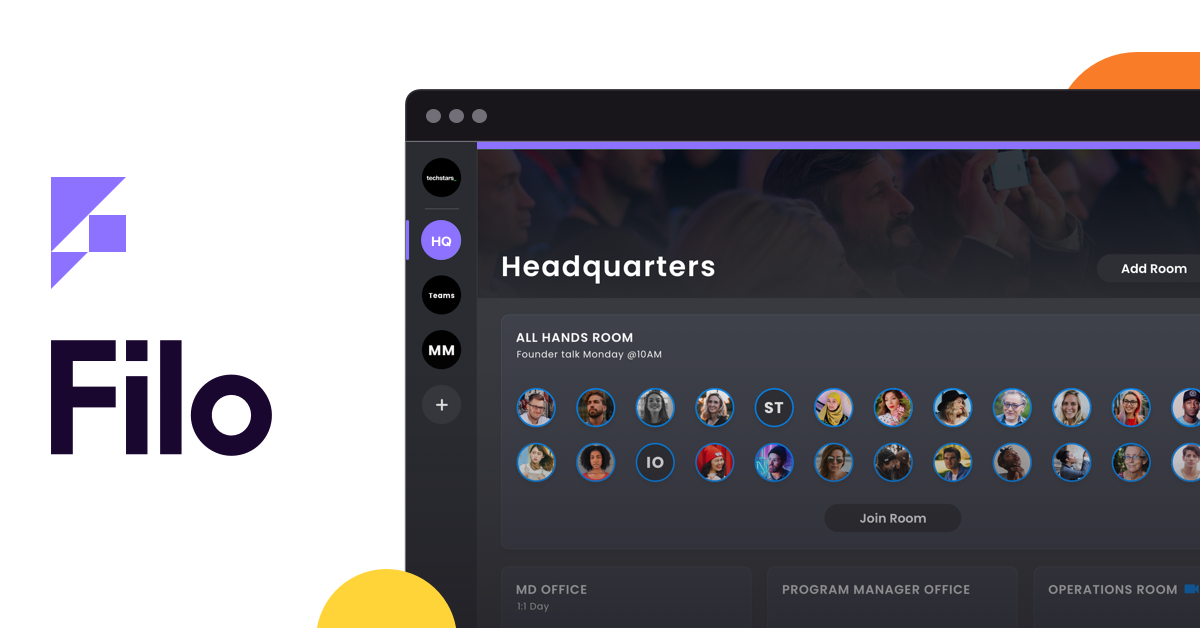 Filo is led by Co-Founder and Chief Executive Matt Compton. Compton spent six years at ExactTarget and Salesforce before founding a mobile app development platform, Waysay, which was acquired by Branding Brand in 2016. Compton is joined by Co-Founder and Chief Product Officer Doug Rybacki, a former product leader at DocuSign and CTO and CPO at Conga, which was acquired by Apttus earlier this year.

“Increased remote and distributed work is inevitable," says Compton. “But when companies shift to remote, group collaboration becomes exceedingly difficult; personal connection becomes burdensome and scarce; information is harder to find and employees burn out. We know diverse teams working together can accomplish amazing things. We just believe they shouldn't have to be in the same place to do it."

With virtual rooms for teams or topics, visibility into digital presence, ad-hoc collaboration, chat functionality and more, Filo recreates in-person environments that provide users with the structure and connectivity lacking in the remote setting. Filo, which was formerly known as “Spaces by High Alpha”, was originally created as a product to run High Alpha's first remote Sprint Week in May of 2020.

“We knew we were on to something special when, using Filo to run our first virtual Sprint Week, we launched more new companies than we ever had before. Filo was such a huge part of our Sprint Week success, that we decided to commercialize it,” said High Alpha Partner, Kristian Andersen. “Filo doesn’t seek to merely create a digital representation of a physical workspace – it’s a complete re-conception of how we think about presence, context and productivity in the virtual context.”

The company is already working with over 20 customers. Early Filo customers include Techstars, Toronto-based CrowdRiff, the University of Wisconsin–Madison, ALS Association, and more.

“With flawless video and an easy interface, Filo allowed us to transition our entire program to virtual and not miss a beat,” said Scott Kraege, Managing Director at Techstars. “It’s enabled us to maintain camaraderie and collaboration that just would not have been possible with standard Zoom meetings.”

To learn more about Filo and see a demo of the product, visit filo.co.

Filo, a distributed company with roots in Indianapolis, is a virtual communication platform for collaborative workshops, programs, teams and events. Amongst virtual rooms for teams or topics, visibility into digital presence, ad-hoc collaboration, chat functionality and more, Filo has the ability to recreate office and in-person environments that provide users with the structure and connectivity lacking in the remote setting. For more information, visit filo.co.

High Alpha, based in Indianapolis, is a leading venture studio focused on conceiving, launching and scaling next-generation B2B SaaS companies. For more information visit highalpha.com or follow on Twitter @highalpha.

Get Started For Free

Filo™ is the best way to work with
people outside your team.